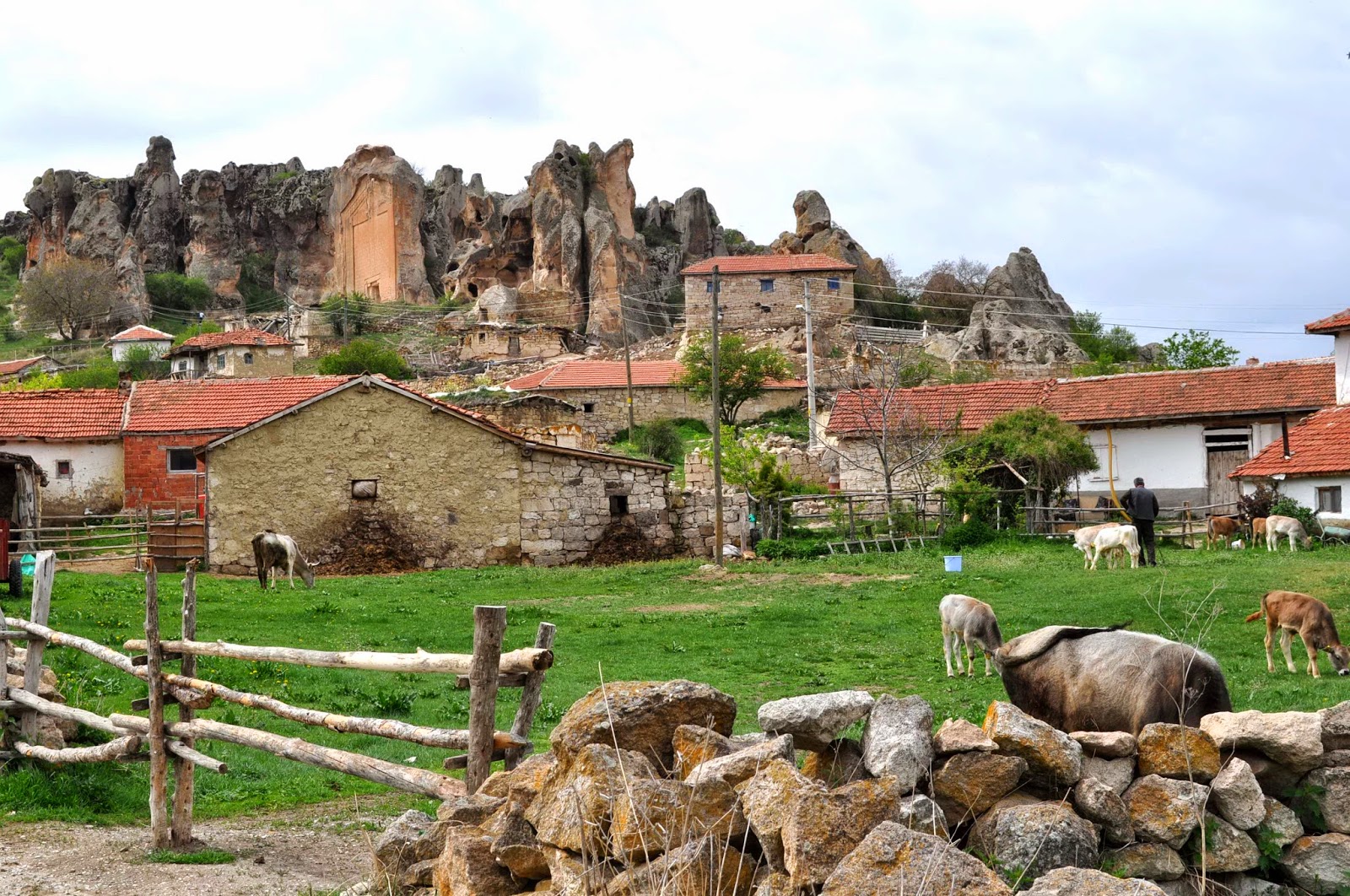 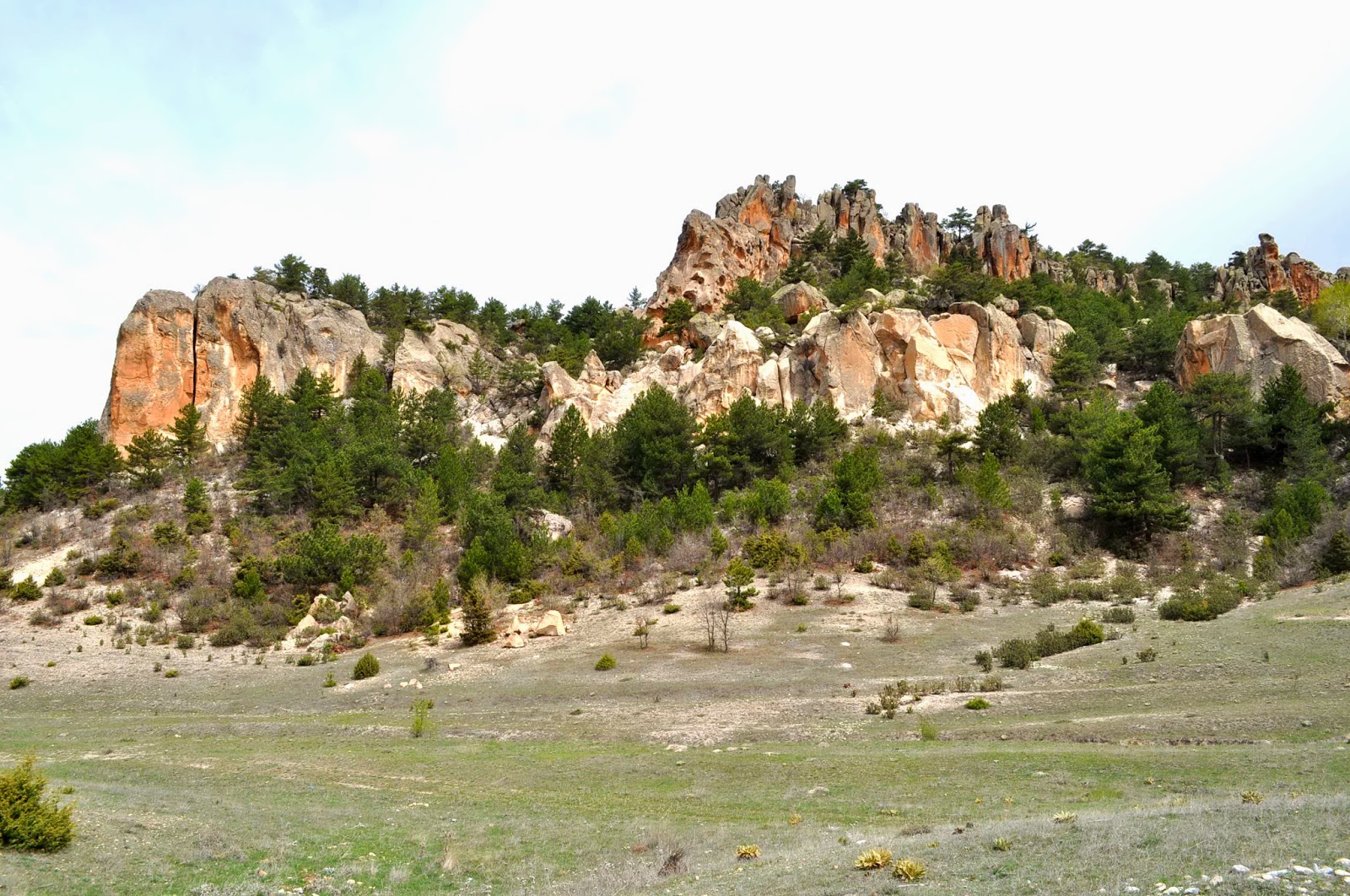 Today’s weather forecast called for rain – all day, so we weren’t surprised to wake up to a very gray and dull kind of day.  Down to breakfast about 8 – believe it or not, I slept something like 10½ hours…gotta re-charge that sleep bank!  Traditional sort of breakfast, with cereals, hot dishes, cold cuts and cheeses.  No cake though – bummer!  As we were preparing to go out, it was starting to rain.  However, as we had some distance to go, we weren’t too worried about it.  Ruins can be discovered in the rain as well as the sunshine! 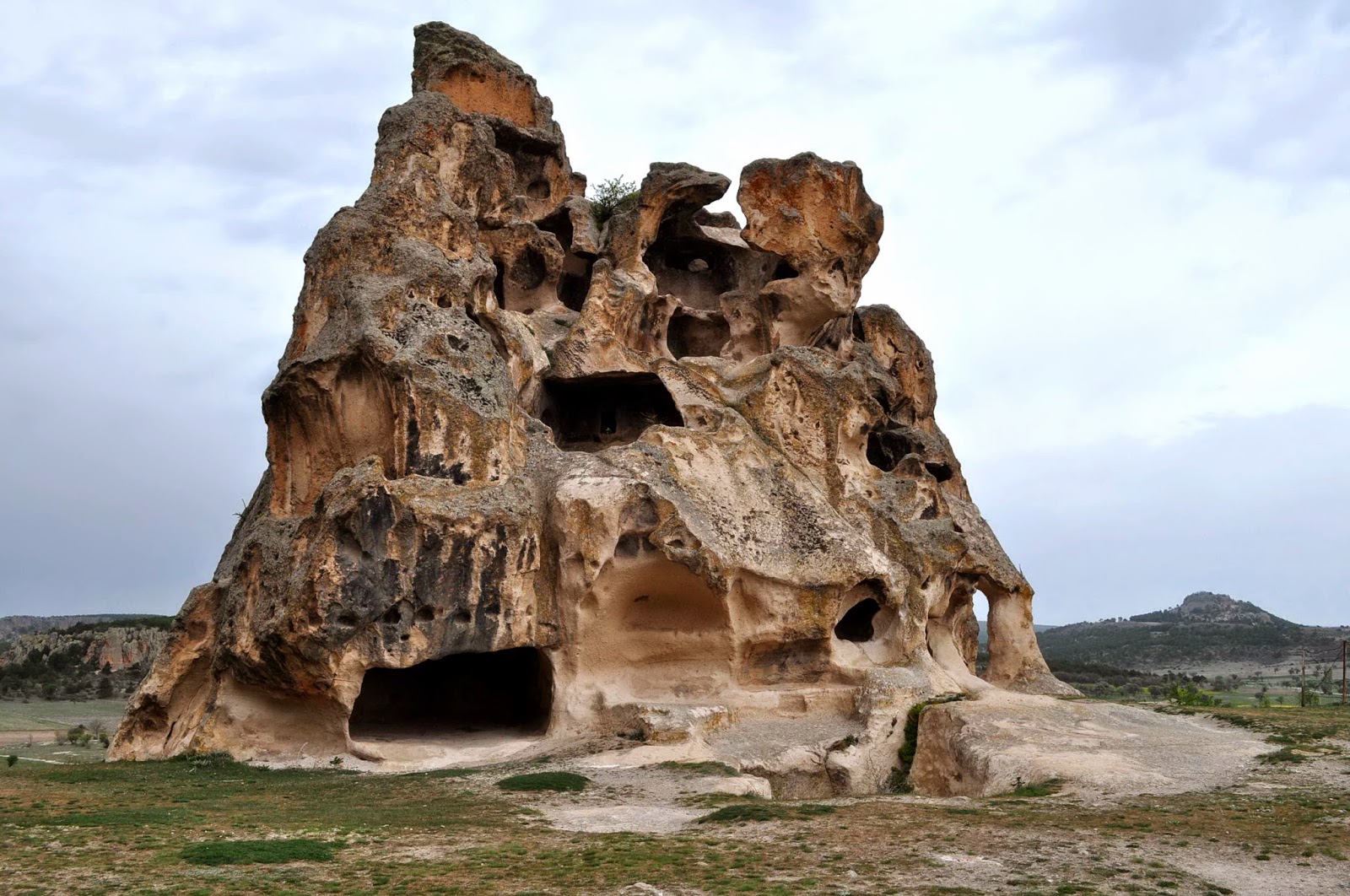 Today’s goal is a repeat visit to Midas Sehri (Midas City) reputed home of “the” famous King Midas, he of the golden touch and donkey ears, and leader of the Phrygian community.  Two years ago, we hit Midas City (also on a Sunday) but there was scaffolding all over the front of the big shrine, as it was being cleaned and preserved.  So, we poked about a bit, then headed back on our way.  However, as we were leaving and driving along a side road, I looked out the window to see people walking along the cliff, behind the big shrine!  Little did I know then that Midas Sehri was, truly, a city and there were many rock tombs and edifices – cisterns, thrones, etc. – carved into the rock to be seen!  As a result, I definitely put it on the list for this year’s trip. 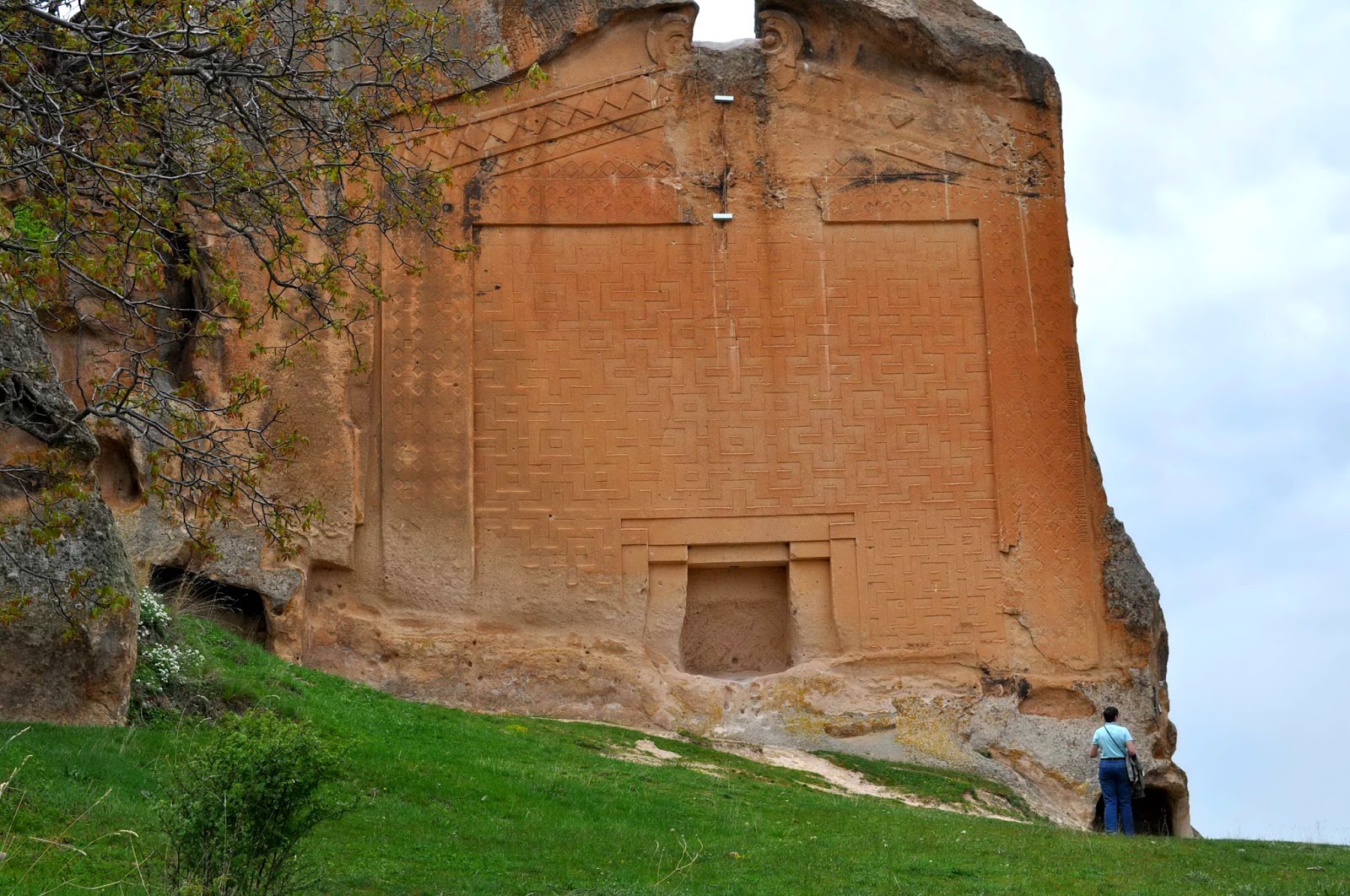 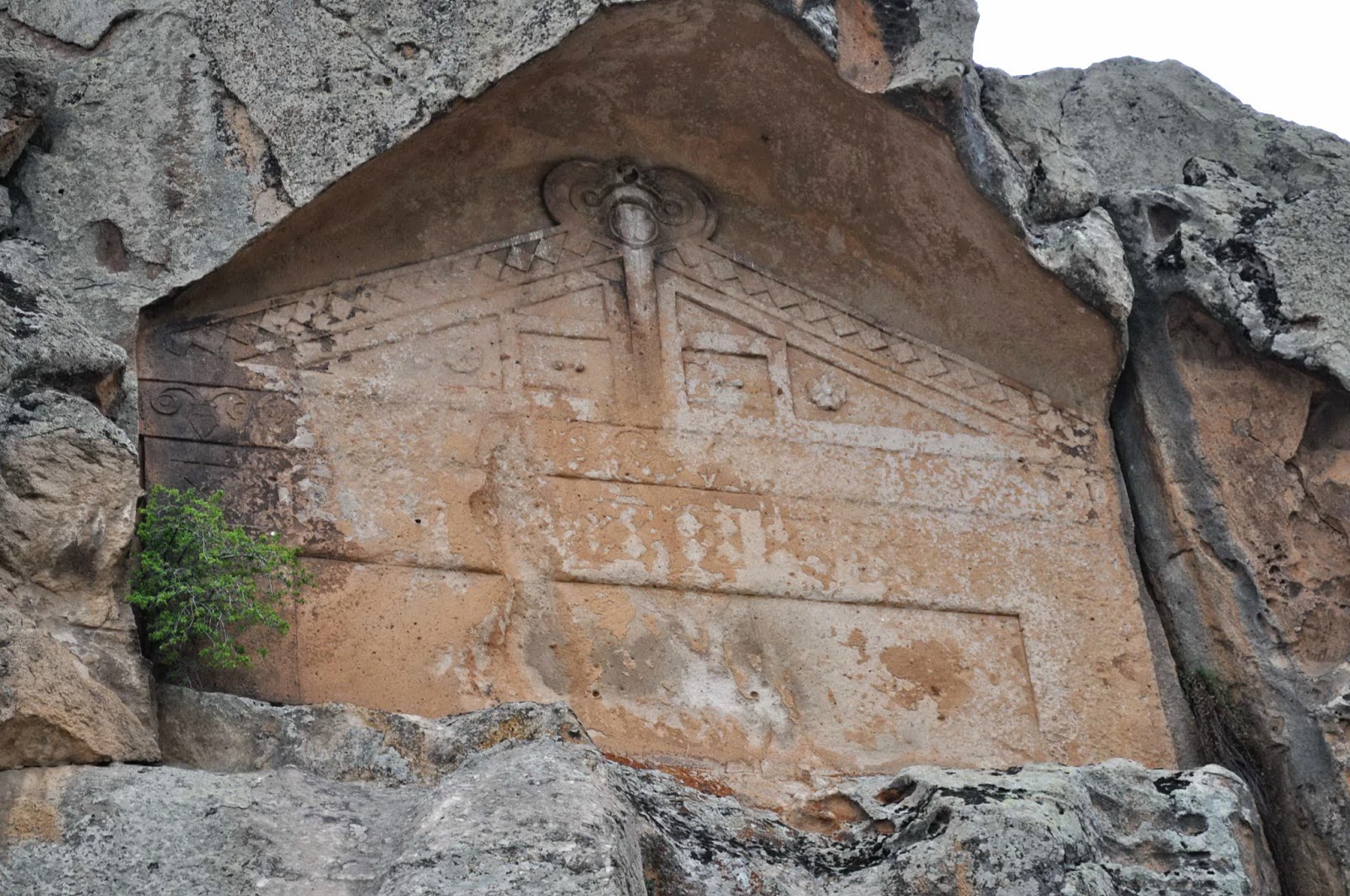 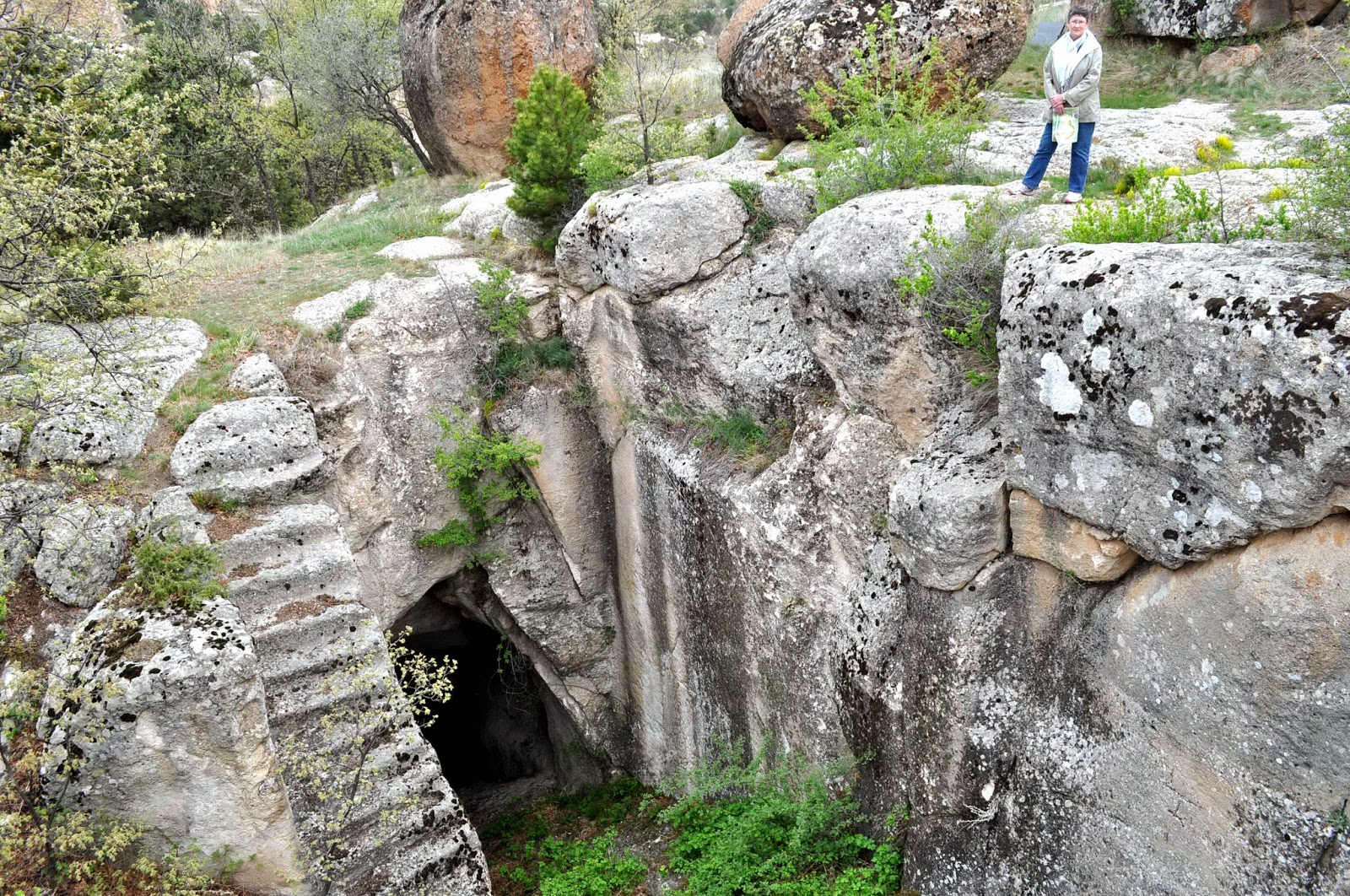 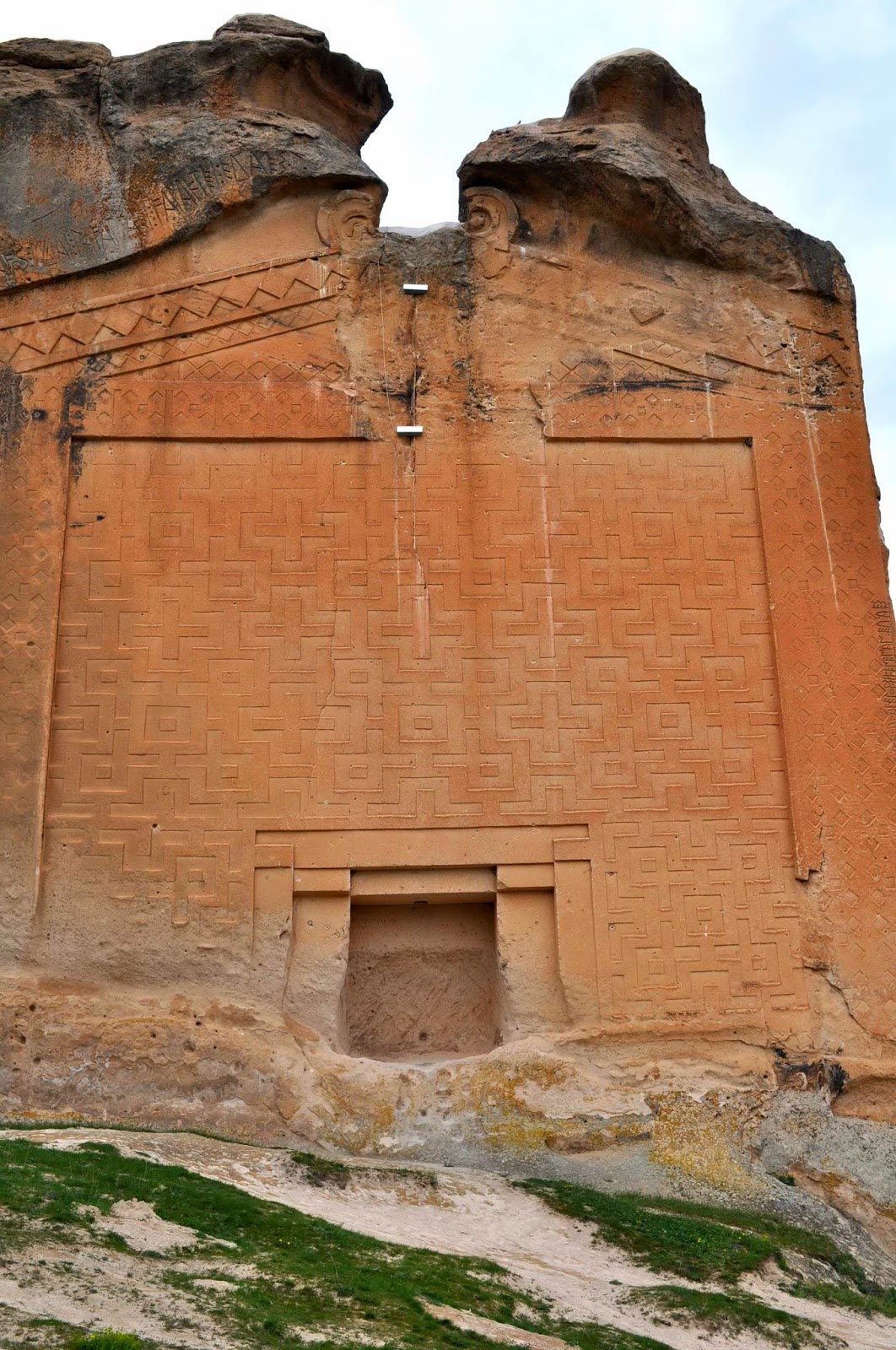 Back to today.  Emmy, our British GPS, guided us there the most direct way – not the fastest.  As a result, we backtracked over some territory we saw two years ago – and, literally, it seemed like we were going through farmers backyards again.  Lots of very bumpy roads as well as gravel and dirt roads.  (That was when R changed Emmy over to “fastest route” – at least then we have a reasonable chance of staying on pavement! 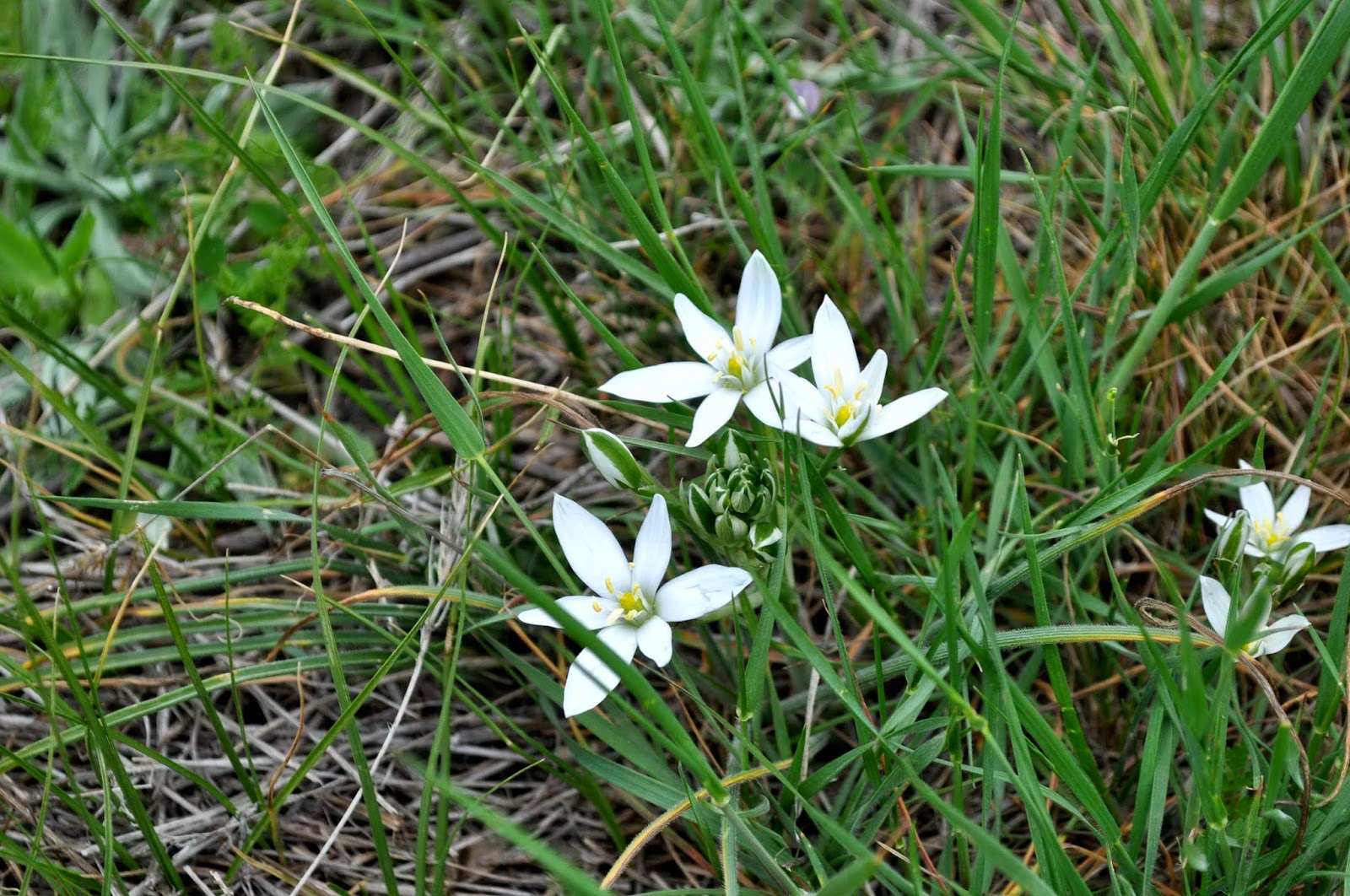 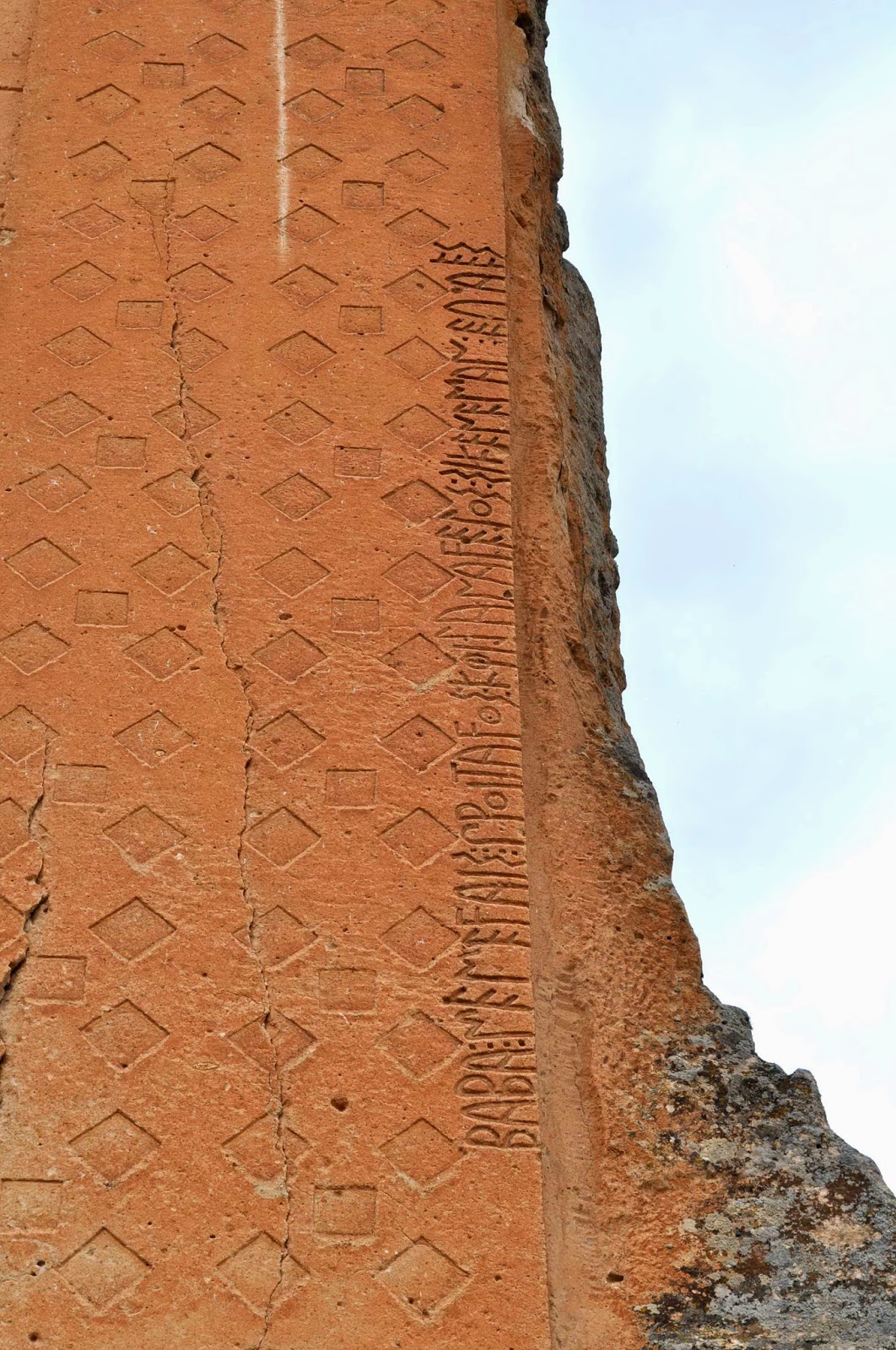 Found Midas Sehri with no trouble, and parked in the parking lot and hiked the half-mile or so into town and the base of the ruins.  This time, though, there was actually a guardian who gave us a real map – in Turkish and in English!  Certainly not the best map I’ve ever seen, but at least it did help quite a bit in showing us what we should be looking for!  (Also, I guessed correctly when R wanted to know if he should go into the “bay” or “bayan” WC!) 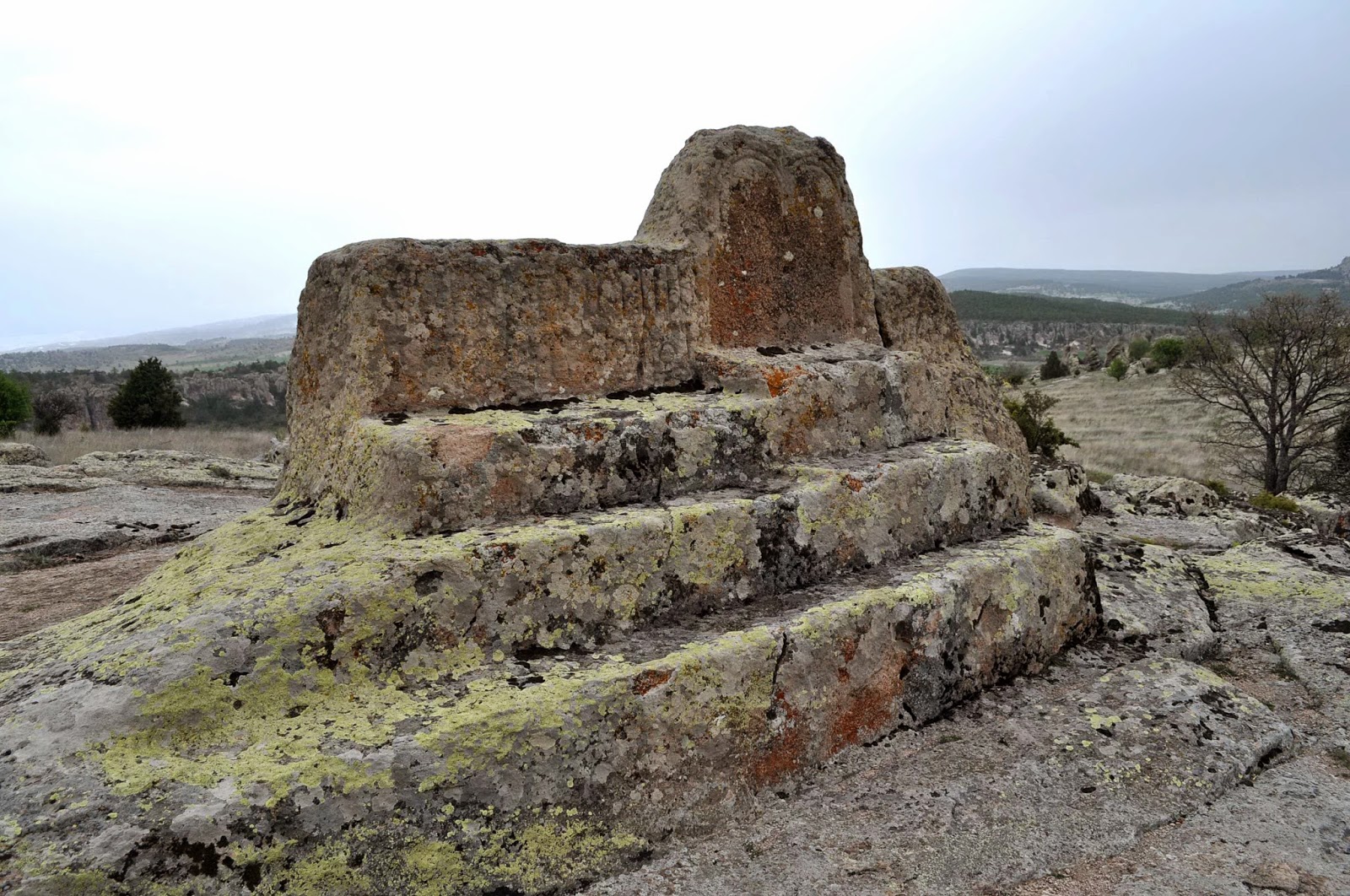 We hiked past the big monument (and R got a really nice picture of some of the Phrygian writing on the side of it) and around the corner to follow the trail – some nice wooden steps, as well of lots of rocks to climb over. (Excellent signage, in Turkish and English, until the signs got wet – and as they were black letters on black basalt, it was impossible to read!)   We saw the Unfinished Monument, one of the cisterns – and then decided to find the large Phrygian altar and throne which was supposedly at the top.   Rather a stiff hike up, but it was very breezy and cool (and threatening rain) and once we reached the top, definitely started to sprinkle.
Finding the altar/throne was difficult.  We were joined in the hunt by a German couple, which at least meant that we could cover more territory.  FINALLY we found it – there is a picture of it!  Very interesting, but whew, quite a hike!  (In all, besides the German couple, we saw three other people in total while we were visiting!  That’s the way I like my sites!!)

We worked our way around the back side of the mountain, and came down again fairly close to the visitor area.  Quite the two-hour hike; ready for a bit of rest at the moment!

Decided to head north, and return back through the really charming university city of Eskisehir.  Also, looking for lunch, as it was WAY past time!!

Robert read about Eskisehir, and discovered that they had an archeological museum that included Hittite articles!  Our first museum in two whole days!!  We headed there, and how nice, they also have a Museum Café! 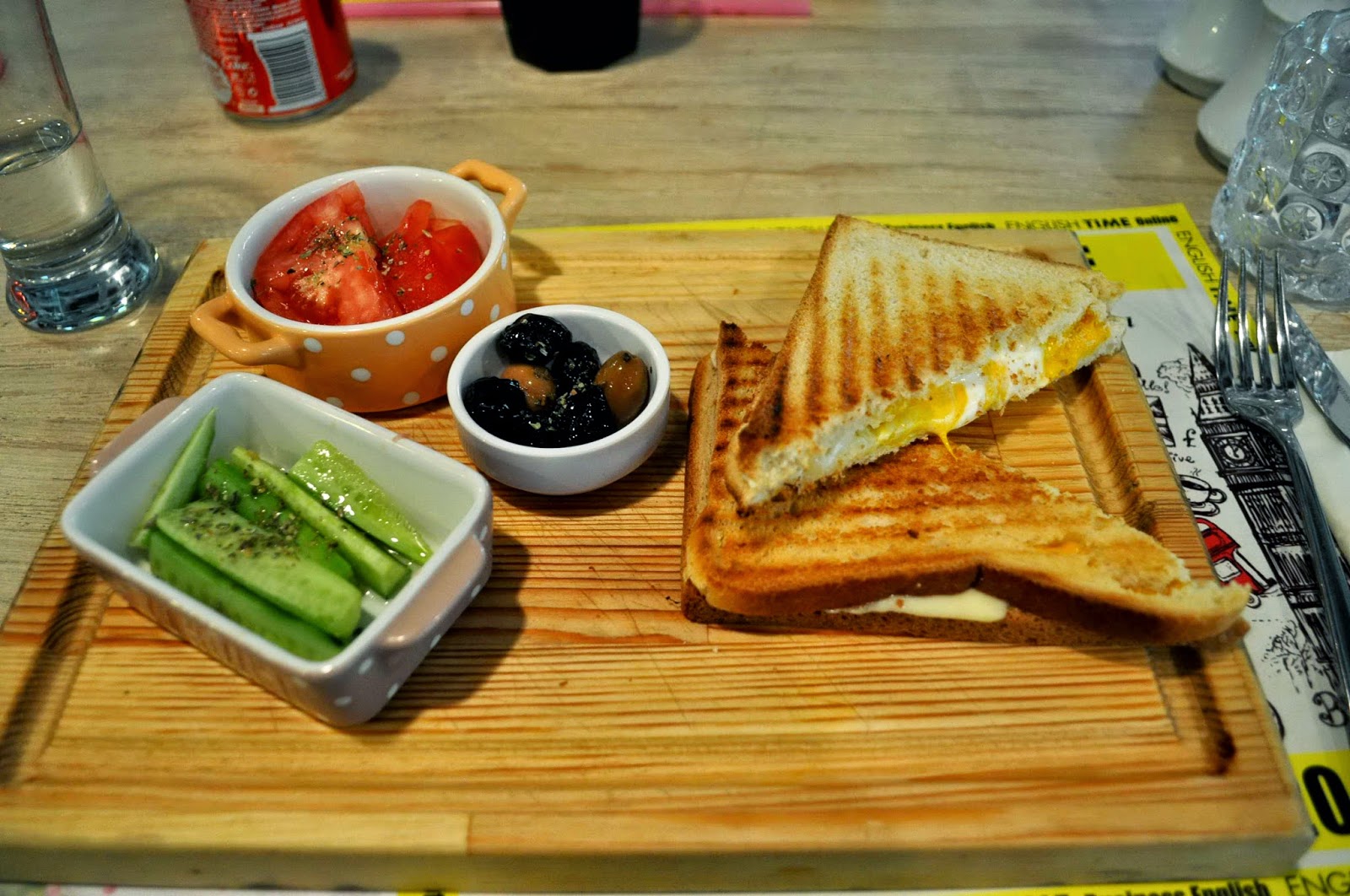 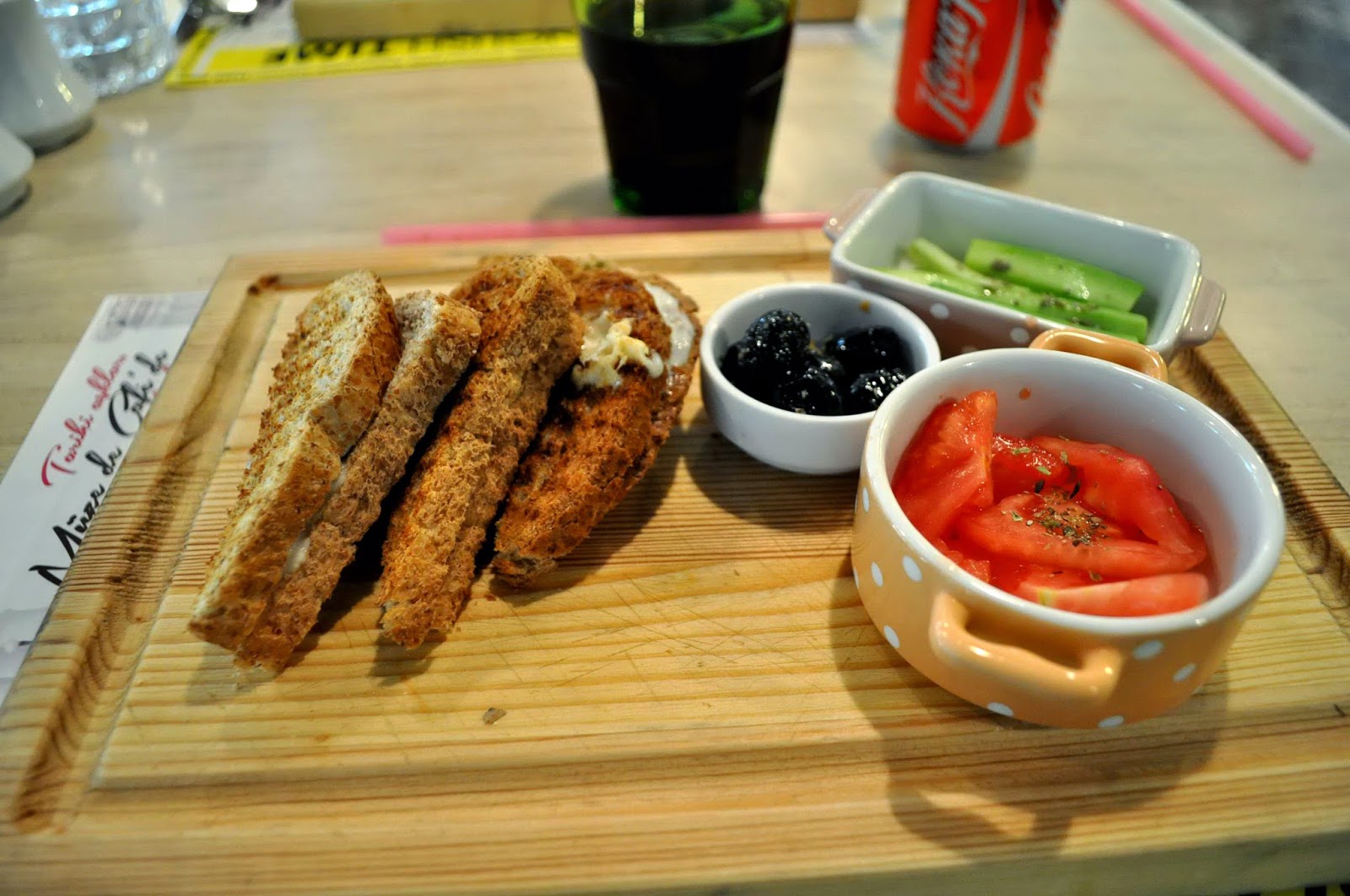 Menu entirely in Turkish, but a few photographs to help!  We both ordered toasted sandwiches – R getting the grilled cheese pictured on the menu, and me taking a stab at the white cheese we have every morning.  Well, I won!  Not only did my toasted sandwich have that wonderful cheese, but it came slathered top and bottom with pesto!  It was great!  Also on the plate were small dishes of black olives, tomatoes and cucumbers.  All together, a very satisfactory lunch! 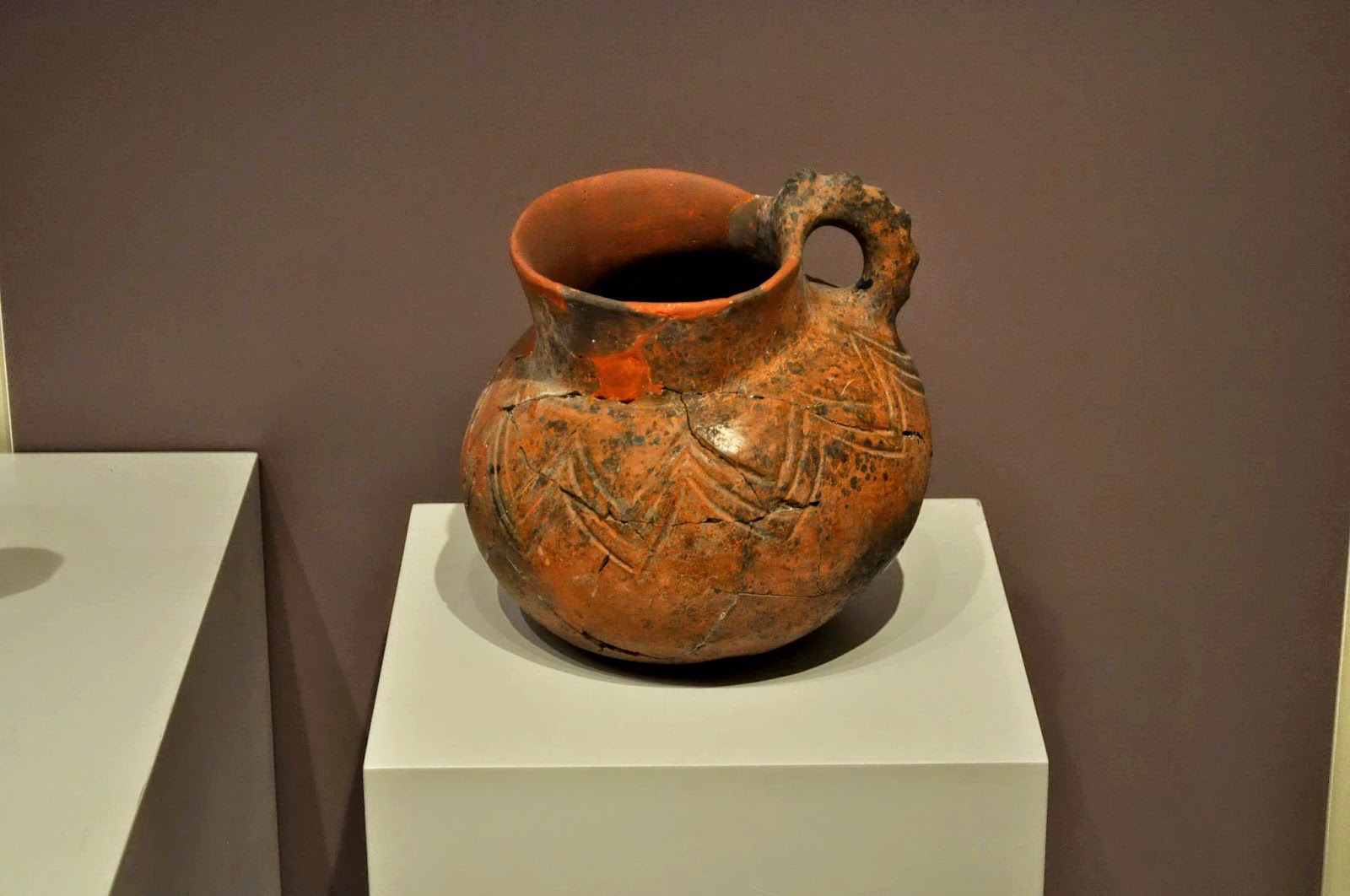 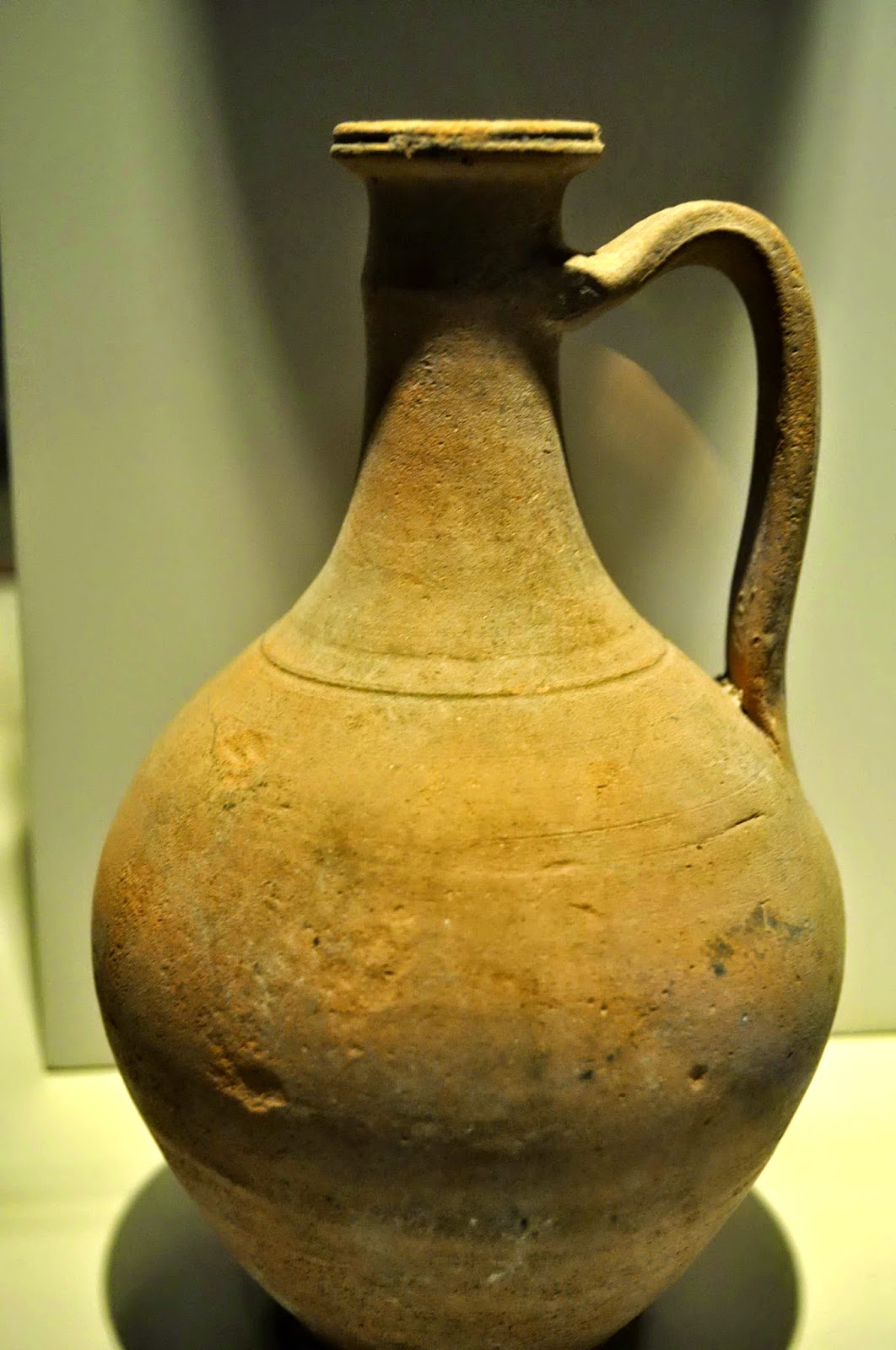 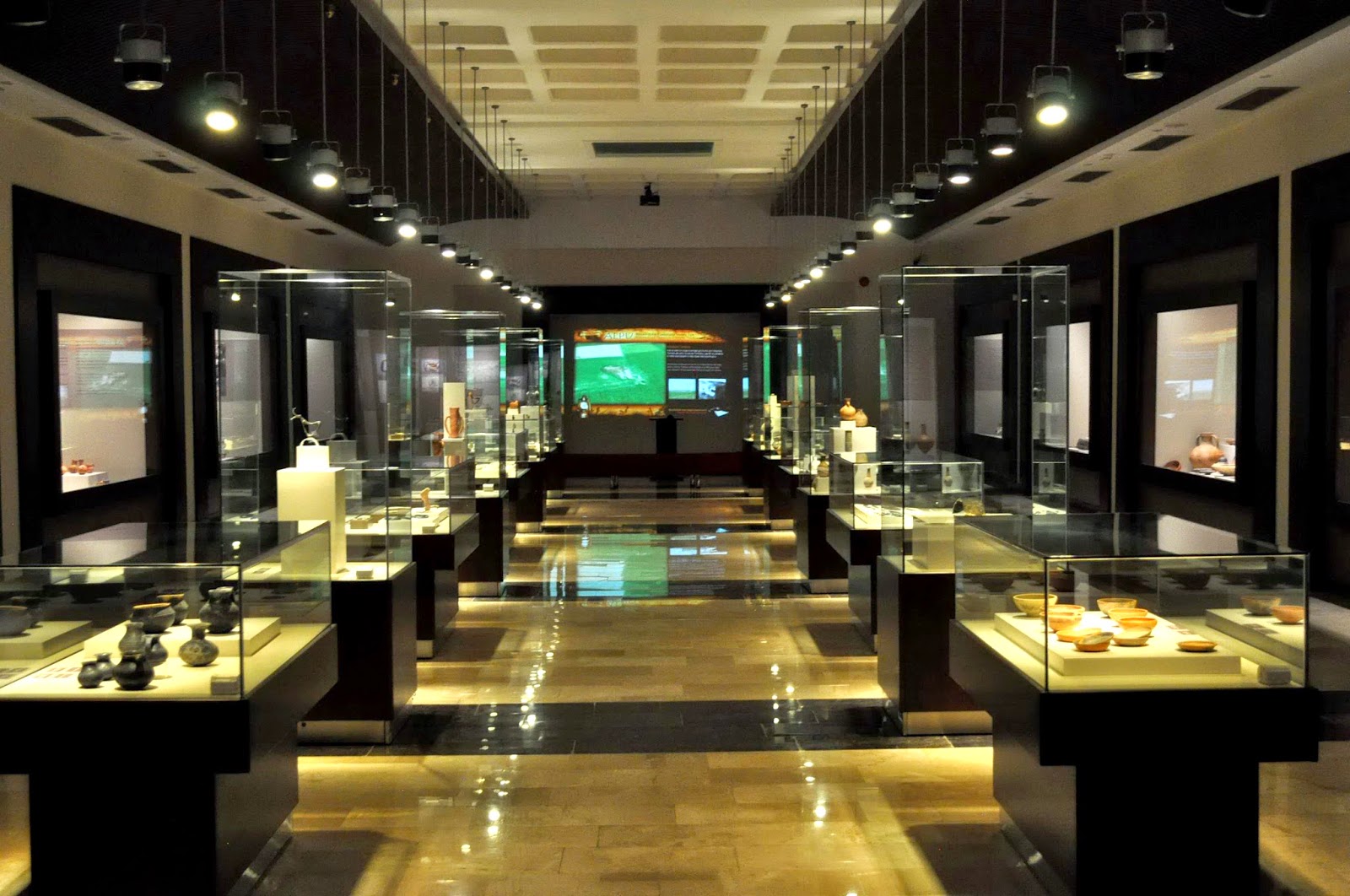 Then into the museum.  We just about had the place to ourselves, and it was not only an extremely well-done exhibition, but someone there definitely has a sense of humor!  Besides the exhibits, you can stand in a chariot box and take the horse reins, and looking forward, drive your chariot around town!   In another place, you could use a mouse and explore a tomb for yourself!  Very clever and fun!  Also, they had large black arrows on the floor so that you would follow in the right order; signage in Turkish and English!

By the time we were finished, I think the guards were ready to give us up…I might be mistaken, but when we finally walked out the door, I thought I heard a collected sigh of relief!  These Americans!  But fortunately for us, they did leave the main gate open just a little bit so that we could get out.

Then, back by main road to Kutahya, arriving here about 5 p.m.  Lovely day!  Dropped our things in the hotel and then went down to Migros (grocery store) for some Kleenex and water.  I’ve found a place that sounds interesting for dinner, which isn’t very far from here…we’ll see if we’re even hungry!  Also, we have laundry being done even as I type!  Put a load in around 5:30 and it was actually done in half an hour!  (Unlike some European machines where I swear there are people inside beating our clothes against rocks, they take so long…)  Now into the dryer!  When they’re done, we will have totally clean clothes, at least for an evening!  YIPEE!